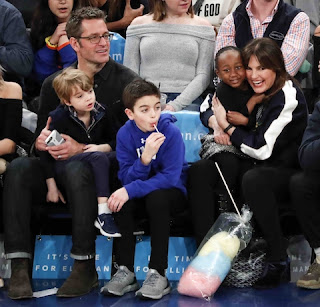 Apparently Mariska Hargitay KNOWS how lucky she is to star on a successful one hour TV series, Law & Order: Special Victims Unit, for almost 20 years – but she didn’t let the long hours interfere with her happy private life. Mariska actually met her actor husband Peter Hermann when he guested on the show and they married in 2004. Mariska has been so affected by her role on the show that she started a charity to help “special victims” of sexual assault, domestic violence, and child abuse. So far they’ve helped more than 5000 victims. Above, Mariska and Peter took their kids, Andrew, 7, August, 12, and Amaya, 7, to a NY Knicks game. Jayne Mansfield would have been proud of her daughter.