Victim: Destroying my rape kit tells me I don't matter 08:00 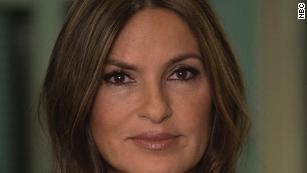 Mariska Hargitay is the founder and president of the Joyful Heart Foundation and the Emmy Award-winning star of "Law & Order: Special Victims Unit." The views expressed in this commentary are her own. View more opinion on CNN.
(CNN)Much has been written this year about women's anger -- its power and potential, its evolution and necessity. But beneath the analysis, there is the feeling itself: anger, pure and simple. It's what I felt when I read CNN's report about the destruction -- the outrageous, careless, wrongheaded, uneducated, ill-informed, dangerous, willful destruction -- of rape kits.
I have been engaged in the work to bring an end to sexual violence since 2004, the year I started the Joyful Heart Foundation, which aims to heal and empower sexual assault survivors. But in truth, my work goes back even further -- to the moment I learned some of the statistics about sexual assault and domestic violence in preparation for my role on "Law & Order: SVU."
For example, in the United States, one in three women and one in six men are survivors of sexual violence. One in four women and one in seven men have suffered severe violence from an intimate partner. Those numbers alone almost made my head explode.
I had that feeling again when I first learned about the backlog of untested rape kits in 2009, after a report from Human Rights Watch. I couldn't wrap my mind around it: thousands of rape kits sitting, in some cases rotting, in police storage facilities across the country.
As Polly Poskin, executive director of the Illinois Coalition Against Sexual Assault, has said, "If you've got stacks of physical evidence of a crime, and you're not doing everything you can with the evidence, then you must be making a decision that this isn't a very serious crime." Beyond the obvious threat to public safety, beyond the wasted opportunities to both prosecute the guilty and exonerate the wrongly convicted, the backlog sends a devastating and inexcusable message to survivors: You don't matter. What happened to you doesn't matter. 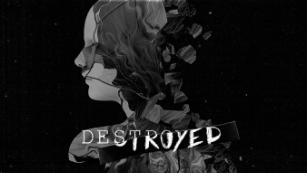 And if the backlog wasn't enough, the destruction of rape kits now brings our country's attitude toward sexual assault and its victims into even sharper focus. Explore CNN's investigative report and you will learn about 99 agencies in 47 states destroying rape kits. About a detective in North Carolina who authorized the trashing of a rape kit a month after it was collected from a woman who was gang raped because the investigator didn't believe her. And about records showing kits were trashed as recently as 2016 -- with one of the objectives being to "make space in the evidence room."
That is an outrageous, shameful level of disregard, and the system that makes it possible must change. Just as the backlog is a reflection of how we regard sexual assault and its victims in this country, the individual actions and decisions by law enforcement are the outcome of deeply entrenched societal attitudes that make those actions and decisions possible. Those attitudes must be dismantled.
And what must change are the laws governing the handling of rape kits. 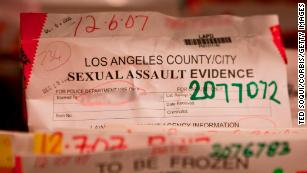 As CNN reports, last year the National Institute of Justice issued recommendations for best practices about the counting, tracking and testing of rape kits, reforms that the federal government agrees are needed. In order to be able to hold jurisdictions accountable, those recommendations must become law in all 50 states. Legally requiring the testing of rape kits and prohibiting the destruction of rape kits ensures that every survivor gets the same standard of care and rights. Importantly, each survivor should also have the right -- by law -- to know the status of their rape kit and have the option of having it preserved for as long as they want.
It is important to note that systemic and lasting change takes effect through state-level legislation. While agency, local, and county-level reforms are vital, we know that perpetrators do not stop at the county limits, and survivors' access to justice should not be restricted by zip code.
Progress has already been made, to be sure. In the last two years alone, we and our partners have helped pass 34 laws to change the way rape kits are handled and are already working on legislation for 2019. Through endthebacklog.org, the first and only comprehensive online hub for information about the rape kit backlog in the United States, we are sharing best practices, progress on reform and a way for people to join this growing effort.
I also had the great privilege of telling survivors' stories who have kits in the backlog in "I Am Evidence," the documentary I produced in partnership with HBO, which continues to be shown in communities across the country.
In the work to bring this violence to an end -- that is the vision to which we must commit -- stark reminders, like this important report from CNN, confront us with how much work is left to be done. While the report's content angers me deeply, perhaps that anger is not pure and simple. It also contains a renewed resolve, a reminder of how much is at stake in our work, and a deepened determination to create the more just society we all seek.
at December 04, 2018 No comments:

Charleston, Des Moines, Los Angeles, Minneapolis, New York and Orlando get a sneak peek at climate change doc ahead of its global release on Dec. 12 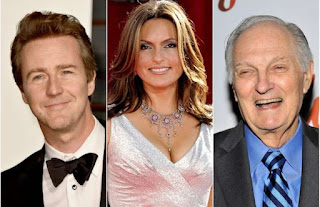 Six U.S. cities will simultaneously screen the film Monday night — many with their mayors introducing the film — in an effort to shine a light on the need for cities, states and citizens to come together to fight climate change. Charleston, Des Moines, Los Angeles, Minneapolis, New York and Orlando will get a sneak peek at the doc ahead of its global release on Dec. 12 at 9pm ET/PT on National Geographic, with additional screenings scheduled in Puerto Rico, London and Poland.“

With Washington asleep at the switch, local governments, states, businesses, and citizens from across the political spectrum are taking steps to tackle climate change and build a bright future for our country,” Bloomberg, who produced the movie through his Bloomberg Philanthropies, said in a statement. “We need more leadership from Washington on climate change, but Americans aren’t waiting around for it.”

The premise of the documentary is based on a Twitter response from Pittsburgh Mayor Bill Peduto to President Trump the moment he pulled out of the Paris Agreement.

In his speech announcing the U.S. would withdrawal from the agreement, President Trump said in a press conference last June that he was “elected to represent the citizens of Pittsburgh, not Paris.”

“I’m sitting in this room, I’m looking over at my phone and I get an alert,” Peduto says in an exclusive clip of the doc obtained by TheWrap. “Read it twice, went into my chief of staff office and yelled, ‘Pittsburgh?!'”

Peduto said that’s when he composed his now famous response telling the president that Pittsburgh was going to stick with the Paris Agreement.

Courteney Monroe, president, National Geographic Global Networks, said in statement. “On the heels of the recent federal report on climate change, we believe it is more critical than ever to create a global conversation about climate and to provide people with tangible ways they can help make a difference.”