From: variety.com
By Tim Dams 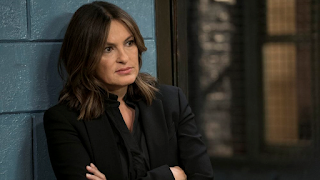 Following in the footsteps of recipients such as Helen Mirren and Donald Sutherland, “Law & Order: Special Victims Unit” star Mariska Hargitay will be presented with the Monte Carlo Television Festival’s top award — the Crystal Nymph — at its opening ceremony on June 15.

Hargitay, who plays Lt. Olivia Benson in the long-running NBC series, has won the lead drama actress Emmy and a Golden Globe along the way, as well as grabbing seven other Emmy nominations and six SAG noms. She is also an exec producer of the show and has directed multiple episodes.

According to the festival, the Golden Nymph award recognizes a “stellar body of work by a major international actor or actress.” As such, it’s one that Hargitay deserves, says Dick Wolf, the creator and executive producer of the “Law & Order” franchise.

“This is a long overdue award for Mariska. She is an Emmy and Golden Globe-winning actress but she has also become an advocate for victims of sexual assault,” he says.

Wolf cites her work for the Joyful Heart Foundation, which she founded in 2004, having become aware through her role on “Law & Order” of the challenges facing survivors of trauma.

The Joyful Heart Foundation provides support to survivors of sexual assault, domestic violence and child abuse. At the heart of its advocacy work is the End the Backlog campaign, which aims to eliminate the backlog of hundreds of thousands of untested rape kits sitting in storage across America. Hargitay produced “I am Evidence,” an HBO documentary film on the topic that premiered in April.

“I’m thrilled Laurent [Puons, Monte Carlo Television Festival chief executive] and the festival have selected Mariska for this prestigious honor,” says Wolf, who is also an honorary consul of Monaco.

Given Hargitay’s long association with “Law & Order: SVU,” the award is also a recognition of the show, which has run for 19 seasons. Wolf points out that it is the second-longest-running drama in U.S. television history, after “Law & Order” and “Gunsmoke,” which are tied at 20 seasons apiece.

“We have been very lucky. We have Mariska and incredibly talented actors, including Ice-T, who has been on the show for 18 years. And our writers, including current showrunner Michael Chernuchin, have continually created stories that reflect these very serious issues and have made a positive impact on our society,” Wolf says.

Hargitay will be presented with the Crystal Nymph by Prince Albert II, honorary president of the festival, as part of the opening ceremony.

“It will be a great moment of the festival,” says Puons. “Mariska has been successfully making ‘Law & Order: Special Victims Unit’ for the past 19 years and she very much deserves to receive this Nymph in honor of her wonderful career.”

Wolf adds: “Her commitment to her craft, as well as her tireless work for victims’ rights, puts her in a class by herself. I am thrilled that she is being acknowledged as one of television’s most iconic performers.”
at June 14, 2018