The ‘Law & Order: Special Victims Unit’ actress and her husband, actor Peter Hermann, are selling their Upper West Side residence

The roughly 7,000-square-foot house spans six levels and has five or six bedrooms depending on how it is configured. It has an elevator, double-height ceilings and a garden and sunroom with two terraces. The couple purchased the home for $10.7 million in 2012, property records show.
The 18-foot-wide home includes an aqua-blue staircase and an orange-yellow kitchen. One of the bedrooms, which belonged to the couple’s youngest son, has electric-blue window frames, orange sailboat wallpaper and a bed built to resemble a ship, the listing pictures show.

Robby Browne, one of the listing agents, said the listing team repainted the property and removed some of the color in advance of putting the property on the market. “I loved it, but when you’re going to be selling something, you have to pull it back a little so that it’s not specific,” he said. Alexa Lambert of Stribling & Associates, another of the listing agents, added that she thinks buyers will be pleasantly surprised by the yellow kitchen.

“Our house was loaded with color and vibrancy,” said Mr. Hermann in an email, noting that he and his wife worked with designer Jeffrey Bilhuber on the décor. “The kitchen is a great example, full of life.” Mr. Hermann said that he would especially miss a big chalkboard paint wall in the kitchen, where they chronicled their five years in the house.

Mr. Hermann said they are selling because their family’s needs have changed, but they would remain on the Upper West Side. 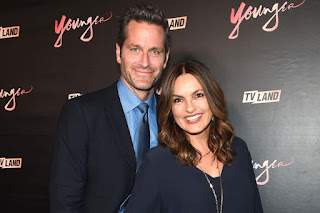 Ms. Hargitay plays detective Olivia Benson on the long-running prime time drama, tackling sexually based crimes, while Mr. Hermann stars on the television show “Younger.” He and Ms. Hargitay met when he began playing a defense attorney on her show, he said. They married in 2004, and have three children.