20 Years in the Making: A Television Legend

From: bcexcelsior.com
By Milette Millington 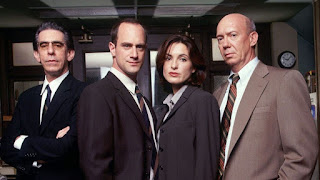 The most recent example of sexual assault is found at the end of last season (“Remember Me/Remember Me Too”). In this episode, a young woman from Mexico takes a man hostage at gunpoint, and Benson tries to dissolve the situation. However, as the team investigates, they soon find out that she was subjected to certain sexual atrocities. The man who was taken at gunpoint ends up getting convicted.

This episode is directly connected to the #MeToo movement that has been going on since October of last year, when movie producer Harvey Weinstein was accused of sexual assault by multiple women.

Over 50 men in the political and entertainment industries have been accused of sexual offenses since then, including former U.S. Women’s Gymnastics Olympic Team doctor Larry Nassar and “America’s TV Dad,” Bill Cosby. Sexual assault is also an emerging problem on college campuses.

Recently, Brooklyn College’s Associate Professor of Business Mitchell Langbert commented on the Brett Kavanaugh accusation by Christine Blasey Ford of sexual assault through a blog post, in the midst of Kavanaugh’s Supreme Court nomination.  The blog post featured this controversial quote: “If someone did not commit sexual assault in high school, then he is not a member of the male sex.” He also called sexual assault “Spin-the-bottle activities.”

The root of the show is to provide victims and survivors of sexually traumatic experiences with a platform for them to share their stories. Making these experiences known allows them to gain confidence knowing that they are not the only ones who’ve had experiences of this nature, and it relieves them of an emotional burden that they’ve struggled to move on from. In addition, it advises people not to be afraid to speak up if something uncomfortable is happening to them. And that is what SVU aims to do.