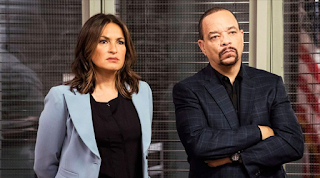 Even if you’ve been more entertained these days by Ice-T’s glorious Twitter-narrated antics and cutting-edge analysis of current events than his bread-and-butter TV career, some Law & Order: Special Victims Unit respect is in order. The spinoff series that zeroes in on detectives who investigate crimes of a sexual nature has broken a major record for live-action TV. The Hollywood Reporter reveals that SVU, with its renewal for the 2019-2020 season, will become the longest enduring live-action primetime TV series in U.S. history. In doing so, it eclipses 20 seasons of both NBC’s Law & Order (ending in 2010) and CBS’ Gunsmoke (ending in 1975). Here’s NBC’s official statement:

“We tip our cap to [creator/executive producer] Dick Wolf, Mariska Hargitay and the amazing cast and crew of SVU, who now all go into the record book,” said Paul Telegdy and George Cheeks, co-chairmen of NBC Entertainment. “This incredible run is an example of what happens when producers, writers and actors all come together and create a show that, year after year, speaks to its audience in a powerful way. We couldn’t be more proud of this remarkable achievement.”

Given that Mariska Hargitay’s still on board, this renewal will also make her Lt. Olivia Benson the female character who’s held on the longest in a live-action primetime series. Somehow, she’s only been awarded one Emmy (in 2006) for this feat but has landed eight nomination nods. Not only that, but Hargitay’s used her platform to advocate for real-life victims of sexual crimes through her Joyful Heart Foundation, which aims to “transform society’s response to sexual assault, domestic violence, and child abuse, support survivors’ healing, and end this violence forever.”

It’s also staggering to note that Ice-T, once notorious for performing Body Count’s 1992 “Cop Killer,” has played a cop on SVU since 1991, which is quite a run. He’s been on board almost as long as Hargitay and told Jimmy Fallon in 2018 that he’d stick around as long as she does. Hargitay has given no indication that Benson would head out the door like Chris Meloni’s Elliot Stabler or Richard Belzer’s John Munch, so here’s hoping to at least another decade of this duo, though they’ll probably never catch up to The Simpsons, which currently holds a 30-season record for the longest running overall primetime series and isn’t done yet.

Ice-T greeted the renewal news on Twitter (of course) by posting an image of himself with creator and executive producer Dick Wolf.