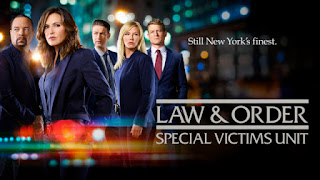 The Law and Order SVU season 19 DVD set is officially coming to fans next month.
Universal Studios Home Entertainment, which is the home video arm of NBC‘s parent company NBCUniversal, has formally announced a DVD release for the Dick Wolf drama’s latest season.

Per the fine folks at TV Shows on DVD, Law and Order Special Victims Unit: The Nineteenth Year will be released on Tuesday, Sept. 4. That’s a little over two weeks from today.

It’s also three weeks ahead of the SVU season 20 premiere, as the show returns to NBC with new episodes on Thursday, Sept. 26.

Here’s the studio’s official description of the DVD release:

Mariska Hargitay returns as Lieutenant Olivia Benson, a role that has earned her eight Emmy nominations for Lead Actress in a Drama Series. As acting commander of the Special Victims Unit of the New York City Police Department, Lieutenant Benson leads a team of dedicated detectives seeking to bring sexually violent criminals to justice.

Universal Studios Home Entertainment hasn’t given out any information about the set’s bonus features or technical specifications. Other than the release date, the only detail that’s been made public is the set’s price: $34.98.

This is an MOD (manufacture on demand) release, meaning that the DVD’s won’t be available in stores—fans will have to order them from online retailer Amazon. So far, Amazon does not have a pre-order listing available for this set, but we’ll update this article when one becomes available.

What’s interesting is how late this announcement came. The DVD releases for the latest One Chicago seasons were announced last month.

Yet, interestingly, even though it’s taken much longer for SVU to be confirmed on DVD, this set will be available before Chicago PD, which isn’t being released until Sept. 11.

The SVU season 19 DVD release should be of interest to both One Chicago and Law and Order fans, though, as this is the season in which former Chicago Justice star Philip Winchester joined the cast as Assistant District Attorney Peter Stone.

Regions for this set has not been release yet.