From: popculture.com
By Jose Bastidas


Mariska Hargitay celebrated the beginning of production for Law & Order: Special Victims Unit season 20 with a new selfie with series creator and television legend Dick Wolf.
The actress, who has played series lead Olivia Benson since the first season, took to Twitter to share with her more than 840,000 followers, the first table read for the upcoming season of the long-running NBC crime procedural.
Through a collection of hashtags, Hargitay announced production for the season premiere of SVU was officially underway, sharing the photo from the first table read, along with a selfie with Wolf. 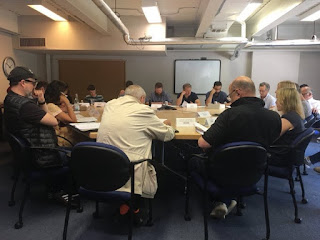 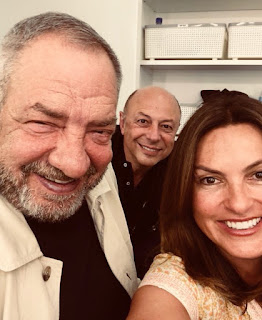 The tweet was met with overwhelming excitement from fans, eager to see what comes next in the lives of Olivia Benson and the rest of the Special Victims Unit.

"So excited for the best show on television to be back filming it's 20th season. Congratulations to you and everyone involved with this incredible show. Hope it never ends," one user commented.
"I can't wait for Season 20!!" Another one wrote.

"Best damn show on TV for 2 decades! Welcome back!" A third one responded.
The photo comes a few weeks after Hargitay revealed she would stay on the NBC series for its 21st season, and beyond.

"The joke with [then-showrunner] Warren Leight and I was season 16 was good, and we said season 17, we're going to phone it in," Hargitay said at a Paley Center panel honoring SVU in June. "That was our schtick on set, because we were so exhausted. And then season 17, we killed it. And then season 18 ... we had a wobbly year. But season 19, I was like, 'I'm sorry, did anyone see the show?' [New showrunner Michael] Chernuchin, every single episode, he outdoes himself."

Chernuchin's leadership during this new chapter in the series' history is what motivates Hargitay to stay involved with SVU.

"This f—ing guy is such a genius, and he listened to everything I said," Hargitay said. "Our writers are so brilliant, and they usually have their own ideas. But he said, 'This is my idea, but what do you want to do?' I said, 'I want to go into what it is like for a woman, like myself, who has three children, and that [difficult work-life balance].' I have three children. Let me tell you something: It costs me every day. Do I quit the show, do I take my kid to school? What do I do? Either way I lose. And only working women understand that."

Hargitay added at the time, though, that she's in on SVU for the "long haul."

"I said, 'You keep writing like this, I'll stay for 25 years.' Why would I leave? I'm so grateful," she said. The feeling seems to be mutual, as NBC Entertainment president Robert Greenblatt said they're looking to keep the show moving as long as Hargitay stays on.

Season 20 of the beloved NBC series will move to a new night and timeslot this fall, starting with a two-hour season premiere Thursday, Sept. 27 at 9 p.m. ET. The series will move to its regular time slot the following week on October 4, with a new episode starting at 10 p.m. ET.