From: popculture.com
By Daniel S. Levine 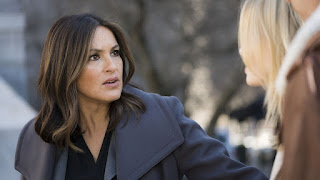 Mariska Hargitay's road to success in Hollywood was not as simple as just following in the footsteps of her famous parents. The Law & Order: Special Victims Unit star recently opened up about the life lessons she learned after dealing with family tragedies.

In 1967, when Hargitay was only 3 years old, she was in a car crash that killed her mother, actress Jayne Mansfield. She was raised by her father, Mickey Hargitay, and his third wife, Ellen. After Mansfield's death, Mickey helped her learn how to deal with the pain.
"The message I got from my father was that life is hard, but you just don’t quit," Hargitay told Closer Weekly of her father, who died in 2006.
Mickey was also instrumental in helping Hargitay launch her own acting career.

"I’d get an audition and he’d say, 'How hard are you going to workfor it?' So I pushed myself even when I didn’t feel like pushing myself. I acted confident even when I wasn’t. And slowly… I became more confident," Hargitay told Closer Weekly. She soon realized if you "kick fear to the side the payoff is huge."

The 54-year-old Hargitay began her career with the 1984 horror movie Ghoulies and found her first lead TV role in the short-lived Downtown. After more lead roles in shows that did not last very long, she landed a recurring role on ER. Since 1999, she has played Olivia Benson on SVU, which will start its 20th season in the fall. In 2005, she won a Golden Globe and won an Emmy in 2006.

"I’ve learned to lean in to the sharp edges. There has been a lot of darkness. But on the other side, things can be so bright," Hargitay told Closer Weekly. "What have I learned from Olivia? Having hope, you know? Stamina. Fierce protection. Never giving up no matter what."

Hargitay has frequently talked about Mansfield, who she still thinks about, more than 50 years after her death.

In an interview with PEOPLE in March, Hargitay said all she has to do is look in the mirror and realizes her mother is still with her.

“My mother was this amazing, beautiful, glamorous sex symbol — but people didn’t know that she played the violin and had a 160 IQ and had five kids and loved dogs. She was just so ahead of her time. She was an inspiration, she had this appetite for life, and I think I share that with her," Hargitay said.

"Losing my mother at such an early age is the scar of my soul," she told Redbook in 2009. "But I feel like it ultimately made me into the person I am today. I understand the journey of life. I had to go through what I did to be here."

Hargitay has a family of her own with actor Peter Hermann. The two have a 12-year-old son, August Miklos Friedrich Hermann. They also adopted a daughter, Amaya Josephine, and a son, Andrew Nicholas, in 2011.
at July 02, 2018