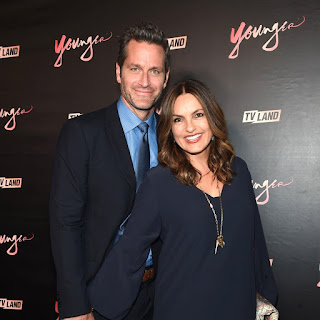 Instead of solving (especially heinous) crimes, Law & Order: SVU's Mariska Hargitay and her husband, Peter Hermann of TV Land's Younger, have solved the case of the perfect marriage. So, what's the secret to their 13-year union?


“There is no secret,” Hermann told Entertainment Tonight. “We’re all just working through it—whether it’s a relationship that exists in the public eye to some degree or doesn’t. Our son plays basketball, and his coach says, ‘Fundamentals, fundamentals, fundamentals,’ and I think when it comes to relationships, the fundamentals, in the end, are not that complicated.”
While that sounds simple enough, after over a decade of marriage, these two know things aren't always going to be easy. “That doesn’t mean that they’re easy, but they’re not that complicated,” Hermann noted. “It's fundamentals—kindness, listen well, fight fair."
The actress jumped in to add an important piece of the puzzle,“Peter knows that I’m always right!” He obviously agreed adding, "and I know Mariska's always right.”
Fellas, take note: Hermann is dropping some relationship gems here: your wife is always right.
And Hargitay has seemingly been right from the start, when the couple met in 2001 on the set of Law & Order: SVU. The actress tried to break the ice between herself and her future hubby with a joke, according to InStyle. “He didn’t think I was funny,” she said, but it only got better from there.
Months later, they were discussing religion and Hermann suggested they attend church together. “I just about passed out when I saw him there,” Hargitay said. “I thought, that’s my husband.”

From there, their love flourished and they tied the knot in 2004. They welcomed their first son, August, in August 2006—now 11—and adopted two more children in 2011: their daughter, Amaya, 6, and son Andrew, 6.
“Being a wife and mother is my life, and that gives me the most joy,” Hargitay told Closer Weekly last year.

Although mom and dad both have busy lives as everyone’s favorite detective and Younger’s heartthrob, Hermann still found time to write a new children’s book, If the S in Moose Comes Loose. Of course, Hargitay was right there to support him. They even got the kids involved by putting their name in the dedication, making the book a true family affair.

“[It] was so deeply meaningful to them, and I remember their faces,” Hargitay said. “To be included in that was so cool, and to know what a huge inspiration the kids were for Peter's fertile imagination was so fun because they know that so many things happened [and] little things they say were included. So that was really cool for them.”
It’s official, the Hermann-Hargitay fam is #goals.
at March 22, 2018