From: amny.com
By Meghan Giannotta 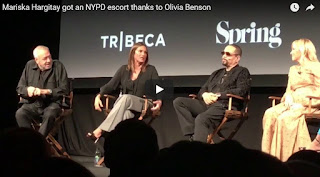 After 20 years in the same role, the lines between actor and character can blur. For Mariska Hargitay, that means being recognized as Olivia Benson of Dick Wolf’s “Law & Order: Special Victims Unit.”
The actress, 54, who plays a fictional NYPD lieutenant, says there can sometimes be perks that come with portraying a beloved law enforcement character.

Exhibit A: scoring a last-minute lift to dodge the crowd at a packed NYC event.

“I have the best story for you,” Hargitay tells “SVU” fans at the Tribeca TV Festival at Spring Studios Thursday night. “So, I’m at the U.S. Open and Peter and I are running and we’re so late, there was really bad traffic, trying to navigate through, whatever that’s called … and all the sudden this white van comes pulling up and goes ‘err.’
“They open the door and go, ‘Get in Olivia!’”

The (actual) NYPD picked up the actress, her husband Peter Hermann and their 12-year-old son, August Miklos Friedrich Hermann, outside the Arthur Ashe Stadium at Flushing Meadows-Corona Park last year.

“We get in the car, we jump in, and before the doors close they pull out and take us right to the front door. I get out and I wanted to do like a tuck and roll,” Hargitay says, demonstrating while a crowd of nearly 500 fans laughs along.

She continues: “I couldn’t believe it. I thought it was so cool. And then as soon as I get to the front, they’re like, ‘Can I look through your purse?’”

Sorry, even a celebrity/Special Victims Unit lieutenant isn’t above a city security check.
“Anyway, it’s stuff like that that makes you feel really good,” she says.