The ‘Law & Order: SVU’ star discusses her powerful new doc, ‘I Am Evidence,’ which explores the untested rape kit epidemic and how it disproportionately affects women of color. 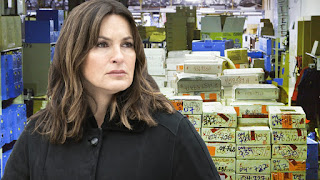 In a somewhat surprising but incredibly uplifting turn of events, TV’s premiere sex crimes detective has dedicated her off-screen life to pursuing justice for sexual-assault survivors.
Mariska Hargitay, the beloved Law & Order: SVU actress, is also the founder and president of the Joyful Heart Foundation. I Am Evidence, a new documentary premiering on HBO April 16th, focuses on Joyful Heart’s years-long cause: the elimination of America’s rape kit backlog.
On Monday night, Hargitay told a rapt audience of friends, foundation board members, film subjects and staff about how the documentary came to be—the “genesis” being “learning about the backlog from Humans Rights Watch in 2009.”


Hargitay continued, “We were so grateful to figure out where to put our stake in the ground…Joyful Heart has been working for so many years on a plan: the six pillars of legislation. We do have a plan, I don’t know how many years its gonna take, but it’s doable, and that’s the good news. It’s exciting to have a roadmap to get there. New York has fortunately really cleaned up, and has been able to clean up the backlog, Texas and Detroit, each state is working towards it, and we are pushing with all of our might to do that.”

I Am Evidence opens on Hargitay, who quickly catches the audience up on how her SVU role educated and galvanized her. Hargitay recalls daily letters from fans opening up about their own sexual assaults; many of the people reaching out were disclosing their stories for the very first time. In what must be the best-case scenario for casting an actress in a crime procedural, Hargitay pushed herself to learn more about these issues, eventually founding Joyful Heart. While I Am Evidence clearly owes a great deal to Hargitay, the film wastes little time pivoting from its benefactress to the hero at the heart of the documentary: Kym Worthy, the Wayne County prosecutor who made it her mission to give Detroit’s 11,341 untested rape kits the consideration that they deserve.
Joining Hargitay at Monday night’s screening, Worthy proudly announced that her team had just sent off the last 617 kits to be tested, but emphasized that the effort to redress over four decades worth of ineptitude and apathy was a “struggle.”
“Detroit declared bankruptcy a few years after [the storage space of backlogged rape kits] was discovered,” Worthy recalled. “And at the time it would cost anywhere from $1,200 to $1,500 a kit to be tested, that’s $12 to $15 million and beyond, and that’s just for the testing. That’s not for the investigation, that’s not for the prosecutorial costs. We didn’t have any money, and I couldn’t find anyone to give us the money to begin with. And later on, once it became popular to talk about, four years later the state gave us money. But really it was Mariska and the Joyful Heart Foundation, and some very prominent business men and women that really poured some money into it…when Mariska came in 2010, it seemed like all the red sea opened, and they listened to her, and it got a lot easier.”

While I Am Evidence is preoccupied with the backlog of over 225,000 untested rape kits across the country, the film starts with Worthy in Detroit—and for good reason. In addition to highlighting Worthy’s leadership and dedication, the documentary delves deep into the causes of the backlog, exploring issues that go far beyond a lack of resources. With help from various experts, I Am Evidence paints a damning portrait of police officers who routinely disbelieved and dismissed women, particularly women of color.

Survivors were told, often explicitly, that law enforcement would not be devoting time or effort to their cases—sending a larger message that, as little as women mattered, as under-prioritized as these crimes were, assaults against women of color matter even less. Officers’ case notes, unearthed, contained dismissive and offensive language, particularly when the alleged sexual assault victims were black women. Poring through these notes, a pattern emerges of women not being believed, with assumptions that they were not really raped made on the basis of victim-blaming tropes or racial biases.

As Hargitay noted during a discussion after the film, the attitudes of law enforcement officers—their inability or unwillingness to properly deal with a sexual-assault survivor or pursue their case—is a major impediment to justice. “One of the things that we hope so much that comes through in the film is the fact that many people, unfortunately law enforcement as well, don’t understand the neurobiology of trauma,” Hargitay said. “We deal with it on SVU, tonic immobility, fight or flight, freezing, you hear so many survivors say, ‘I froze’—that’s hardwired into us…that idea of law enforcement literally not understanding. They get confused—I’m not even blaming—they just go, ‘Well she didn’t say anything, she didn’t scream, she didn’t fight back, she didn’t do this or that,’ and it’s because they don’t understand trauma.”

Co-director Geeta Gandbhir noted during the discussion that, “This is obviously a fight that’s been going on for a really long time for women and for people of color, and people who are economically disenfranchised—it’s not that our voices haven’t been out there, it’s just that we haven’t necessarily been heard. To have a medium and platform to be heard is incredibly important, and for me it was a huge honor.”

While listing a couple of the things that she found most “pivotal” about the film, Worthy added, “The other thing that no film has ever done, as far as I’m aware, is show the plight of women of color when they’re victims of sexual assault. It’s something I’ve been saying for years, and no one really wants to listen, and I think that they’ll have to listen now. [I Am Evidence] also shows the juxtaposition between cities and counties that have money, and those that don’t. And I’m very pleased that we’re on the right side now, and things are going a lot better for us, partly as a result of us being involved with this film.”

Given the myths and biases that surround sexual-assault cases, it’s possible to understand why so many rape kits—potential evidence against rapists, potential tools in assuring that serial offenders don’t assault again—have been allowed to languish in forgotten storage spaces untested. But explanations don’t make the backlog any easier to stomach, especially after I Am Evidence puts faces, names, and stories to those untouched kits.

One of the survivors featured in the film is Helena, a vocal advocate who cites her horrific experience as evidence that women, particularly women of color, are not listened to. After she was abducted and assaulted by a stranger, Helena immediately went to the police. She recalled going through a re-traumatizing evidence-collection process, and being subjected to the questioning of “indifferent” and seemingly disbelieving detectives. In an online testimony, Helena said that, “No further contact was initiated by the Los Angeles Sheriff’s Department, and they did not return my calls for over 13 years.” In one of the film’s most painful moments, a crying Helena wonders what it was about her that was so unimportant—why her violent assault didn’t seem to matter.

In 2009, after learning about the rape kit backlog, Helena got in touch with advocates who were able to get through to law enforcement; within a week, Helena learned that her kit had been processed, and that there was a match. While Helena’s rapist was already in jail, she learned that he was serving time for “a nearly identical assault that could have been prevented if my rape kit had been processed.” I Am Evidence speaks with the victim of that assault, as well as Michelle Brettin, the Ohio police officer who arrested the serial rapist. In the film, Brettin expresses her shock and disbelief that the Los Angeles Sheriff’s Department failed to adequately pursue Helena’s case.

On Monday, Brettin gave a teary apology to the group of assembled survivors: “I’m embarrassed that I was a part of law enforcement that’s turned a blind eye to this. And if one person hears what I have to say now, I’ll be happy. These women here, no one should have to go through this, and no one should have to be rejected by the keepers of the people, the keepers of the peace. Law enforcement has failed them.”

Another featured survivor, Ericka, who is also the Executive Director of the Detroit nonprofit Supreme Transitions, shared her experience watching the film. “I had a lot of anxiety leading up to this day,” she confessed to the audience. “But seeing the film again tonight, and getting my reminder from Mariska—this bracelet, she gave me, says strong—and I’ve realized how strong I am. I realize how strong our voices are. And as I watched the credits, and I looked at the names, I know those people. This was not for show; this was not done for publicity for Mariska at all. I know every single person on those credits, they have held my hand and told me that they care, and told me how much they care about this project and about me and about the survivors. I don’t know how other people feel when they’re in films, but I know those names…This was made with love.”

While Hargitay, directors Gandbhir and Trish Adlesic, and the assembled subjects of the film covered a lot of ground, from the need to further educate medical professionals to pressuring legislators, their discussion ended on their hopes for I Am Evidence’s immediate impact. Worthy explained, “Every time someone sees this film, that’s a potential juror, and I hope that they can be better informed…Because you’re wearing nice clothes doesn’t make you a robbery victim, and because you act a certain way or do certain things shouldn’t make you a sexual-assault victim either.”

Hargitay had the last word, beginning, “I’m gonna be super honest right now.”
“The problem is the victim-blaming attitudes,” Hargitay continued. “I’m going to tell you right now, as the founder and president of the Joyful Heart Foundation, I was one of those people who had some of those biases. I was! And I got checked, and I got educated. I’d love to sit here and tell you how evolved and wise I was from the beginning…but it wasn’t like that for me.”
She concluded that the issue of the backlog was ultimately one of “humanity,” insisting, “Testing the rape kits is humane, because it treats a person like a person. And so I just want to say that, because we can all sit here and be like, ‘Oh my gosh, those people with the victim-blaming attitudes…’ I was one. And I’m so grateful that I’m not one anymore. And for all those people who have those attitudes, I hold hope out for them. I hold hope that they’ll see the movie and go, ‘Holy shit. Oh my god, I’m so sorry.’ That’s what I hope.”