Mariska Hargitay tells Cleveland audience: "The good news is we can change this" 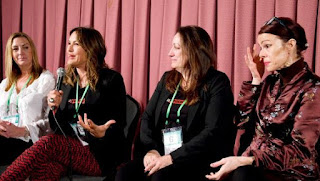 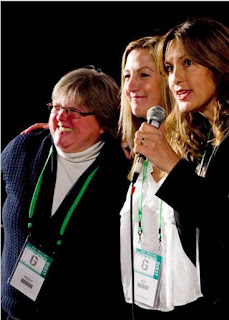 CLEVELAND, Ohio - In "I Am Evidence," Wayne County Prosecutor Kym Worthy summed up the frustrations of those confronting the backlog of untested rape kits in the United States.
"Nobody gives a damn about women in this country," she said.
But producer Mariska Hargitay and director Trish Adlesic are out to change that - and they're using their movie to do it.
They joined Cleveland survivors, county and state investigators and Plain Dealer reporter Rachel Dissell - all of whom appear in the searing documentary - for a Q&A after a Sunday afternoon screening at the Cleveland International Film Festival.

There are hundreds of thousands of rape kits - containing DNA and other forensic evidence collected from the bodies of mostly women - that remain stockpiled and unexamined in cities across America.
What can average people do to help, a woman in the audience asked?

The actress and activist learned about the backlog she calls "a travesty" in 2009. Like so many people, she "assumed that if a woman went through a 4-to-6-hour re-traumatizing examination, obviously, [the rape kits] were tested . . ." And then, investigated.

That they weren't was a wake up call that has turned into a movement, said Hargitay. She hopes it will push all 50 states to do what Ohio has done, which is make the testing of old and new rape kits mandatory, while pushing for other reforms about how sexual assault investigations are handled.
"The good news," she said, "is we can change this."

Dissell and colleague Leila Atassi uncovered some 4,000 rape kits had been untested in Cleveland. Today, 13,931 rape kits from all around the state have been tested. "And those are generating leads for potential suspects," said Dissell.

Those leads meant justice for Danielle Erbs and Allyssa Allison, two survivors from Cleveland who are seen in the film. So is Cuyahoga County investigator Nicole DiSanto, who tracked Erbs' attacker to North Carolina and brought him back to Cleveland, where he was convicted of her rape and kidnapping.
"It was very freeing," Erbs told the audience. "Knowing that he can't hurt anyone else."

.@mariska quotes @RachelDissell "we can't change what happened to people but we can listen..." @IAMEVIDENCEmov pic.twitter.com/Q7oY4xeYRl
-- Dani Carlson (@DaniCarlsonSays) April 8, 2018


Rape kit testing also identified Allison's rapist after she'd spent decades waiting, but he died before he could go to trial. Though she'd never get her day in court, "I'm not looking over my shoulder anymore," she said.
Also on the panel was retired Fairfield, Ohio, police officer Michelle Brettin. In "I Am Evidence," she is shown using DNA to collar a long-haul truck driver who had been raping and terrorizing women from California to Ohio for years.

"These are real-life Olivia Bensons right here!" Hargitay shouted, pulling a blushing Brettin and DiSanto to their feet for some well-earned applause.
"I Am Evidence," premieres on HBO at 8 p.m. on Monday, April 16. For more information, visit endthebacklog.org. Read more about about the Rape-Kit Series by Leila Atassi and Rachel Dissell at cleveland.com/rape-kits/
at April 09, 2018