All the 'Law & Order: SVU' Exits That Broke Our Hearts 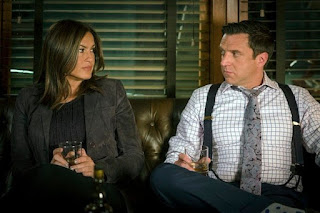 Spanning 19 years on air (with no sign of slowing down), Law & Order: Special Victims Unit audiences are no stranger to a revolving door of cast members.

In fact, series star Mariska Hargitay — who portrays tough-as-nails mama bear Lieutenant Olivia Benson — is the only original player who remains on the show. Co-star Ice-T follows not far behind, as he is still heavily entrenched in the role of Sergeant Tutuola, after joining the series at the beginning of the its second season.
Between police officers putting in for their retirement and district attorneys getting in trouble with the law, Manhattan SVU and the prosecutor's office has seen its fair share of changes. Read on for SVU's most heartbreaking exits, and who we can definitely count on to return to the NYPD once again.

It’s been nearly 7 years since Chris Meloni left the role that arguably put him on the map, and fans still aren’t over the departure of his beloved character, Detective Elliot Stabler. Luckily, Meloni has said he’s more than willing to return to the show in a series finale, but the 19-year-old procedural is still going strong.Until we get our SVU miracle (and hopefully a Benson-Stabler hookup), we’ll have Meloni’s reunions with former co-star and best friend Hargitay to tide us over.

Dann Florek’s exit from SVU was extra bittersweet, as his role as Captain Donald Cragen spanned not only 15 years on SVU, but an additional three years on the original flagship, Law & Order, from 1990-93. While we love seeing Lieutenant Olivia Benson oversee the precinct where she’s spent nearly two decades, we still miss Cragen’s firm but kind rule as a father figure over the 16th Precinct. But hey, the guy had to retire sometime, right?


We can’t imagine it was easy for Richard Belzer to hang up his hat as Detective-turned-Sergeant John Munch — particularly since the character holds the record for appearing on the most television shows.In addition to SVU, the surly, sarcastic cop has starred on Law & Order, Homicide: Life on the Street and made appearances on The X-Files, The Wire, Arrested Development, 30 Rock and The Beat. In total, Munch has appeared on ten different television shows.
Munch has returned to the SVU screen as a guest star following his departure, and we’re certain it’s not the last we’ll see of our favorite conspiracy theory-loving officer.

ADA Alexandra Cabot
Actress Stephanie March has drawn in SVU audiences since Season 2, when she took on the role of fierce and passionate Assistant District Attorney Alexandra Cabot. She prosecuted the toughest criminals through Season 5, when her character entered the Witness Protection Program after putting herself in the middle of a case involving a drug overlord. Cabot returned for a guest appearance in Season 6 and later made reappearances in Seasons 10, 11 and 13 before leaving for a new job at the prosecutor's office of the International Criminal Court.


Fans were slow to warm up to Detective Nick Amaro, who took over as then-Detective Benson’s partner following the exit of Elliot Stabler. As viewers caught glimpses of Amaro’s hot-headedness and big heart, they discovered he actually wasn’t all that different from Benson's former partner. It took some time for Benson to warm up to him, but it wasn’t long before he (platonically) wormed his way into her heart. Danny Pino left the role of Amaro after three seasons, when the character moved to California to be closer to his child.

Detective Brian Cassidy
Detective Brian Cassidy left SVU smack dab in the middle of Season 1 and surprised fans everywhere when he returned in Season 13 after a long and intense stint undercover. Over the course of the next few years, diehard fans remained divided over Cassidy’s presence, as he and Benson entered into a serious relationship after having a one-night stand back in the first season. The two split in Season 15 and Cassidy returned as divisive as ever in Season 19 when he broke the news to Benson that she was being investigated for child abuse. Dean Winters is set to reprise his role again later in the season, but details of the appearance have been kept under wraps.


ADA Rafael Barba
Assistant District Attorney Rafael Barba — portrayed by actor Raul Esparza — was late to the SVU universe, but that fact didn’t make him any less beloved to fans. Barba was a recurring character in season 14 before being upped to a series regular in the show’s 15th season. Fans latched onto Barba’s passion for justice, in addition to his style and camaraderie with the precinct, particularly Lieutenant Benson. Esparza exited the show in the middle of its 19th season — devastating many fans — but as is the case with most of SVU’s revolving cast, the door has remained open for him to return.

Ryan O'Halloran
The forensic technician was a fixture on the show for several years as a part of the Crime Scene Unit. Tragically, O’Halloran is one of the few recurring characters to be killed off the show. The show’s 11th season finale was actor Mike Doyle’s final episode, which saw O’Halloran murdered by his forensic assistant, Dale Stuckey. O'Halloran wasn't a main player, but that didn't make his death any less heartbreaking for SVU fans.

ADA Casey Novak
Actress turned potential Congressional candidate Diane Neal first appeared on SVU in Season 3 as a perp before she took on a new role in Season 5 as Assistant District Attorney Casey Novak, replacing outgoing ADA Alex Cabot. Novak got off to a rocky start with detectives and remained a divisive character until she left in the show’s ninth season with her law career in jeopardy. She returned in Season 13 — law career intact — as a recurring character alongside Alex Cabot, but hasn’t made another appearance since then.

Dr. George Huang
Forensic psychiatrist/FBI Agent Dr. George Huang first graced SVU screens toward the end of Season 2. The character was incredibly valuable to the squad, thanks in no small part to his superior criminal profiling skills.  His killer insight often led detectives to cracking even the toughest criminals. Actor B.D. Wong exited the show in Season 12, but later made return appearances in Seasons 13, 14, 15 and 17.