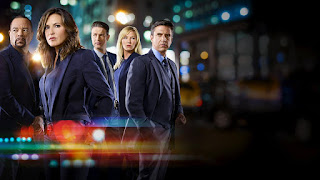 Olivia Benson (Mariska Hargitay) and the elite squad of special detectives are back for a new season -- its 19th! -- of Law & Order: Special Victims Unit, and ET has your first look at the premiere, which will take the action all the way to Cuba.

The new season kicks off on Wednesday, Sept. 27 with an international tug-of-war when Det. Odafin “Fin” Tutuola (Ice-T) chases a fugitive rapist from New York to Cuba, potentially derailing Assistant District Attorney Rafael Barba’s (Raúl Esparza) legal case. Meanwhile, Lt. Benson, who is still acting commander of the SVU, is faced with shocking allegations that leads to the return of an old friend.

The premiere, “Gone Fishin’,” will see the return of Dean Winters as Brian Cassidy, a former SVU detective who now works for NYPD’s Internal Affairs and was briefly romantically involved with Benson, as well as series regulars Kelli Giddish as Det. Amanda Rollins and Peter Scanavino as Det. Sonny Carisi.

While not too many details about the new season have been released, there will be some new faces both in the SVU and the courtroom. Brooke Shields has been cast in a recurring role that shakes things up for Benson.

“I'm excited to stir the SVU pot a bit,” Shields said in a statement to ET, later revealing to Newsday that her character is “pretty complicated and it’s gut wrenching. What’s so amazing about the show is that the characters are so rich and layered, and they’re just filtering me through it.”
Shields will make her first appearance on Oct. 11. Meanwhile, Philip Winchester will reprise his Chicago Justice role, Assistant State’s Attorney Peter Stone, when he joins the series full-time midseason and Annabeth Gish (The X-Files) will appear as a defense attorney in episode three.

There have also been changes behind the scenes, with Michael Chernuchin taking over as showrunner. And in an interview with EW, he revealed that the new season will tackle the Charlottesville, Virginia, riots. “You can bet your bottom dollar that we’ll do that,” he said. “We don’t want to take a stand on any political point of view, but we like to present the issues. What I want is, at the end of a show, for half the people to stand up and cheer and the other half to throw their shoes at the TV. I want controversy.”

Other ripped-from-the-headline episodes this season will touch on passengers being dragged off commercial airplanes as well as catfishing and cyber-bullying in an episode that Chernuchin described to THR as “our answer to 13 Reasons Why.”
Law & Order: SVU premieres Wednesday, Sept. 27 at 9 p.m. ET/PT on NBC.
at September 14, 2017