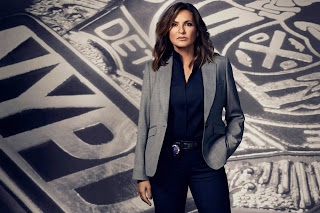 When Dick Wolf first pitched the idea for a spin-off of Law & Order based solely on sex crimes, producers worried that its potential failure would hurt the goodwill of its parent show. But now, as Law & Order: Special Victims Unit gears up for its 20th season — tying its predecessor — the series is gunning for Gunsmoke's record as the longest-running scripted drama in television history. And while showrunner Michael Chernuchin is intent on breaking that record should SVU get the greenlight for a historic 21st season, he has no plans of stopping after that.

"I don't see any reason why this show will end," the SVU boss told TV Guide. "[We're going to continue] until Mariska [Hargitay] says, 'let's end it,' because we're dealing with things that are on the front page in the papers every day. Now, more than ever."
He certainly has a point. The #MeToo movement picked up massive steam in October 2017 when a slew of actresses publicly accused now-disgraced Hollywood producer Harvey Weinstein of sexual assault and harassment. The outpour of support from other women who shared similar experiences brought the sensitive topic to the forefront of national conversation — a fact not missed by Chernuchin, who wants to tackle the movement in an episode next season.

"This whole Me Too movement... it's everywhere. Even though we've been touching on it for 19 years, we may do a full-blown episode on that," he said. And it makes perfect sense. After all, SVU's DNA is rooted in these sort of ripped-from-the-headlines stories, so dedicating an entire episode to the massive movement isn't just inevitable, it's expected.


As the series prepares to stake its claim as the longest-lasting scripted drama on TV, Chernuchin says he's focused on looking toward the future. He's so confident in SVU's sustainability, in fact, that he's never even given any thought to what this show's ending would look like. "No, I have not," he said. "If we start to get a whiff of the network saying this is the last year, then we'll dig our heels in and think about it. But until then, I don't really see a reason to think about it. I don't see the show going away."

But if he had to put a number on when to call it quits, Chernuchin already has one in mind: "I'd like to get to 500 episodes. That's a nice round number, isn't it?" he added.
With the show having aired it's 434th episode on Wednesday, that means Chernuchin is hoping for at least three more seasons of SVU before it bows out, which would bring it to a potential record-breaking 22 seasons. Here's hoping the SVU team gets to chance to see this dream through.
at May 25, 2018